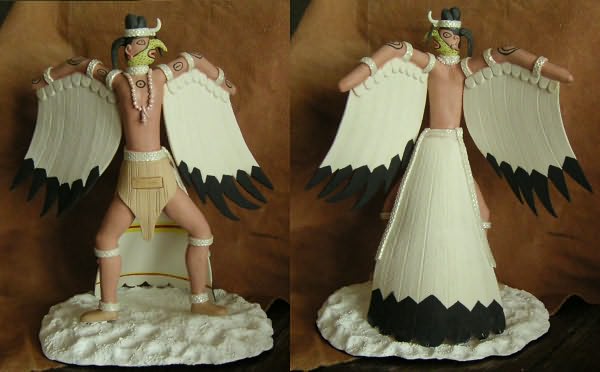 Southeastern Indians perceived the world as having three realms, the Upper World, and Underworld existing first followed by this World. The bird human being resides in the upper world.  They have been described as ancestral beings, ceremonial dancers, gods, warriors, eagles, and hawks or falcons.  They are associated with religion and considered similar to angels by some.

The Southeastern Indians of the mound building cultures of the Mississippian period utilized a variety of bird-human designs on many items both utilitarian and ceremonial.  These figures have been found on copper and shell gorgets in several of the historic mounds as well as on shell bowls, ceremonial items and stone carvings.

This Eagle Dancer statue is hand sculpted from colored porcelain.  Details were added with underglaze and the base was gessoed to whiten it and make it look more cloud like.