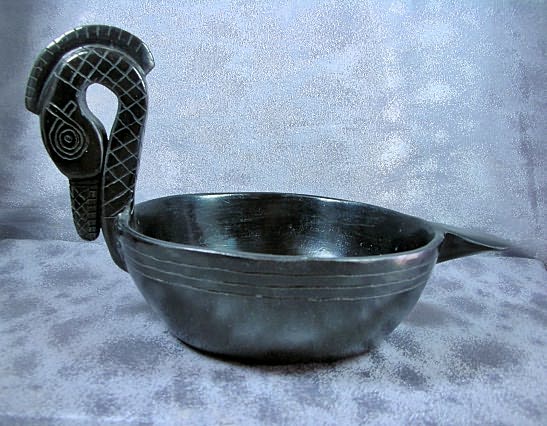 Burnishing is a traditional way of finishing Native American pottery.  Traditionally Native American pottery is fired to a very low temperature in a wood fire, sometimes in a pit, sometimes in an open fire, sometimes in some sort of a container or enclosure.  Traditional Native Clay which the ancients and the Native Americans of today, such as myself, can find in our environments is an earthenware clay.  After a simple low temperature firing earthenware and native clays are very porous.  The ancients did not have glazes to make their clay pots shiny and water proof, but at some point they discovered that rubbing the pots with a smooth stone would result in them getting somewhat shiny. They probably discovered this quite by accident in an attempt to get a smoother, more even surface on their pots.  They would have discovered after firing and using these shiny pots, however, that they held water better and were easier to clean.

Why you might ask would this have anything to do with how they hold water?  Well clay is made up of tiny plates not round particles like sand.  When mixed with water into a soft clay and formed into a pot these plates lay every which way allowing lots of room between them for water to flow through.  When you rub the unfired pot with a rock you coax the plates to lay flat on top of each other and you tend to compact them as well.  This greatly reduces the rate at which water can flow between them.

Have a look at this video which shows how a pot is burnished.  It should give you a greater appreciation for the burnished pot and the time required to accomplish this finish.  This video is real time and only shows a small section of the bowl being burnished.  At the end of the video you will see the bowl after the completion of the burnishing process.