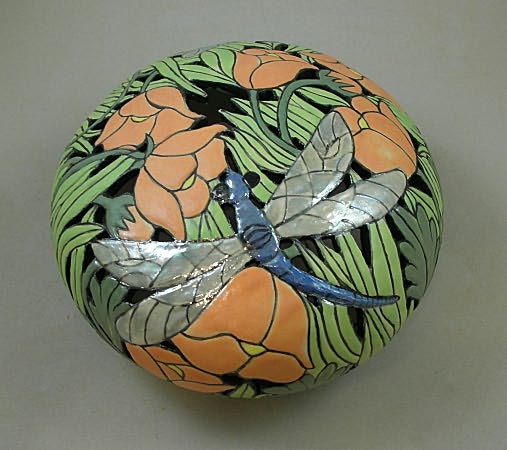 This video shows me slip trailing the dragonfly on this large porcelain pot.  This pot was hand made from porcelain and sanded smooth.  Then the design was drawn on with underglaze and the pot was softfired to set the design so it wouldn't rub off during the rest of the process.  Next the holes were all carved into the pot.
Next all the colors were added using the slip trailing method shown in this video on the dragonfly.  The material being applied is colored porcelain.  It is applied with a brush.  When complete the pot was fired to cone 6 (1200C or 2000F)  Then the wings of the dragonfly were glazed and it was fired again.  Then Mother of Pearl was applied to the wings and it was fired once again but to a much lower temp only 720C