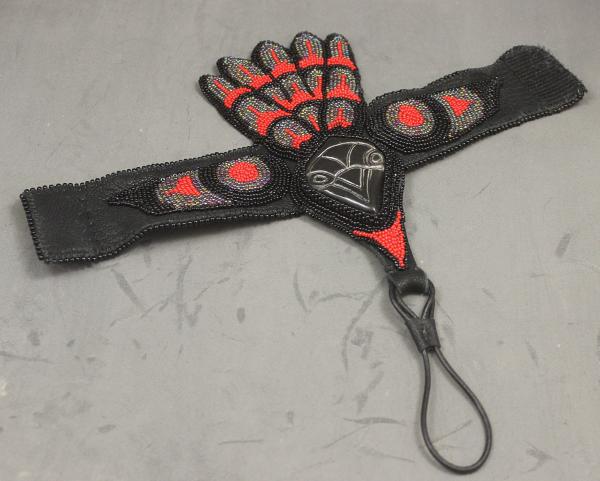 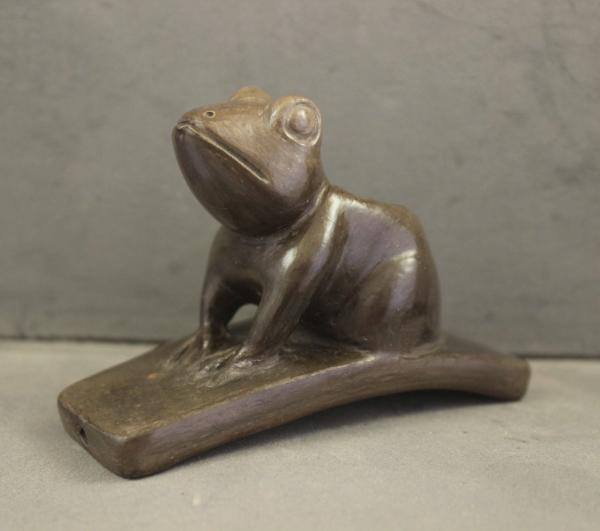 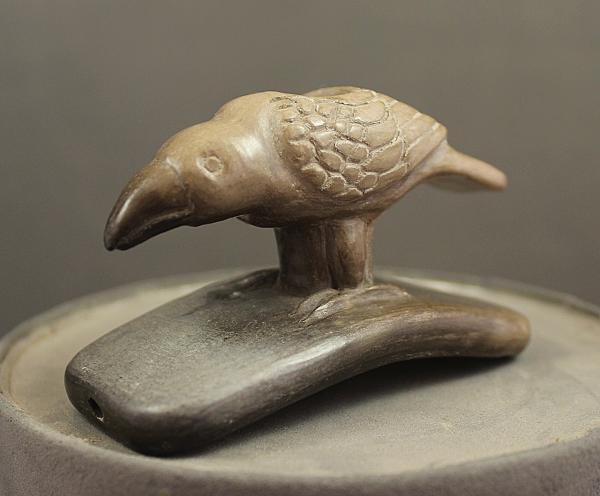 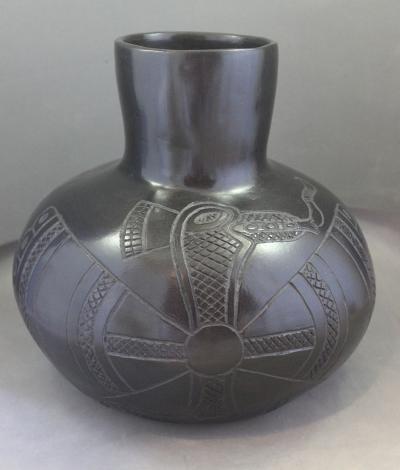 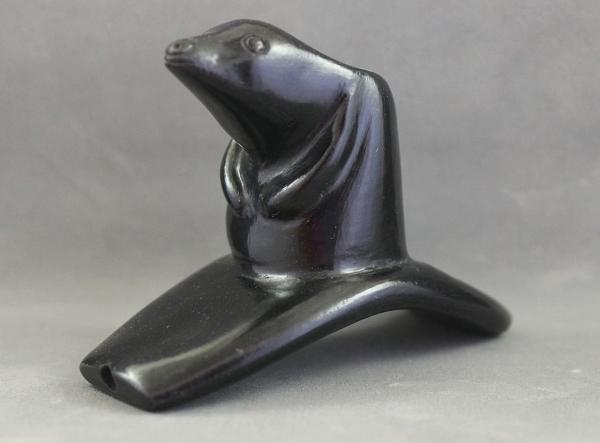 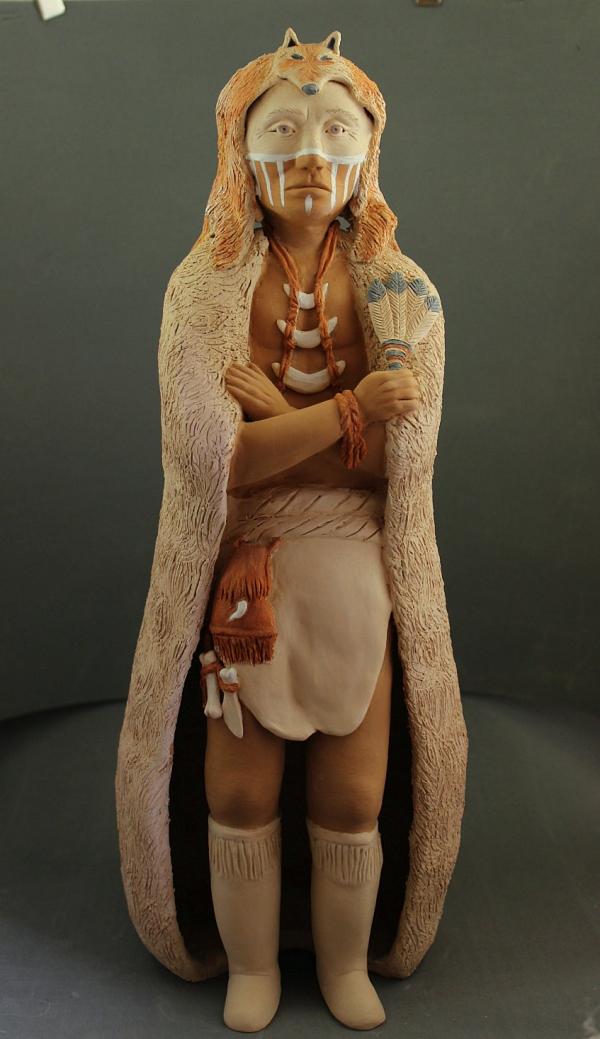 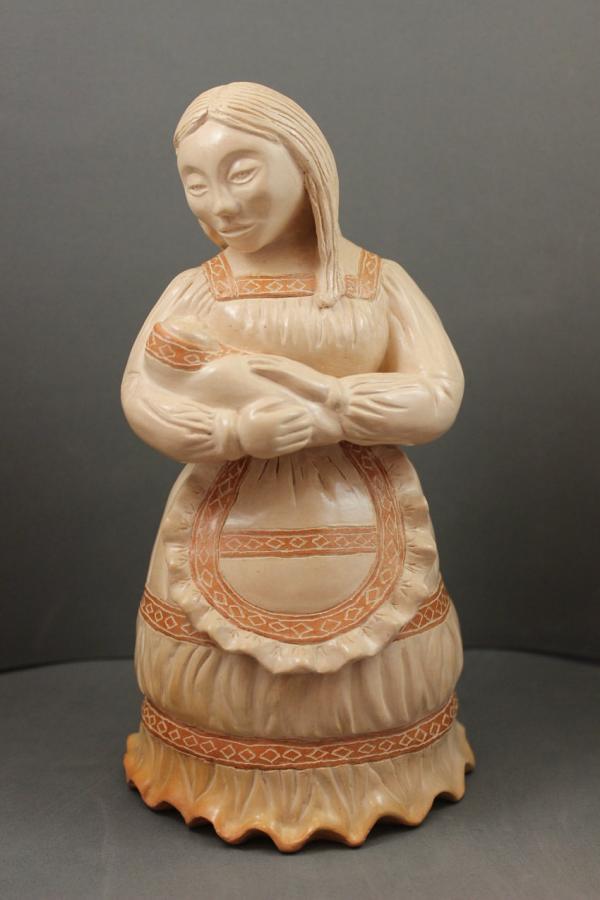 Choctaw Mother and Child
This small sculpture celebrates the giver of life, mother.  This little lady is dressed in Choctaw traditional dress.  She is made from hand dug clay using the coiling method, hand burnished with a rock and fired outdoors in a wood fire. 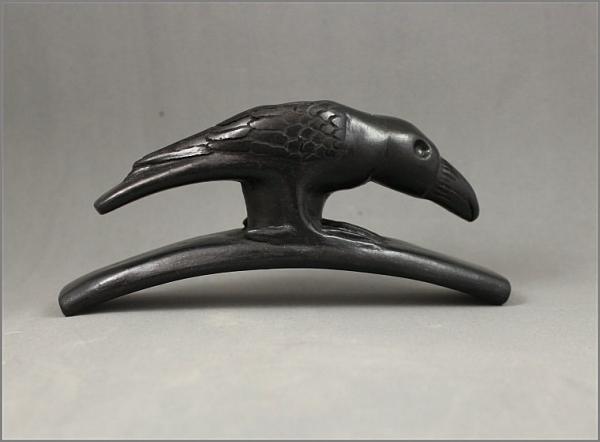 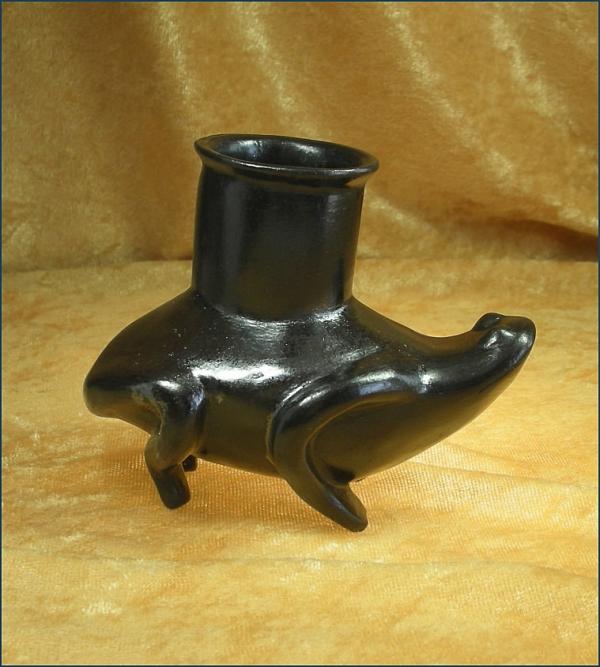 This small bottle is a reproduction of a Mississippian period bottle.   This particular bottle is smaller than the original mound builder pieces.   It was hand built from native clay which I dig myself, hand burnished with a rock and fired in a wood fire. 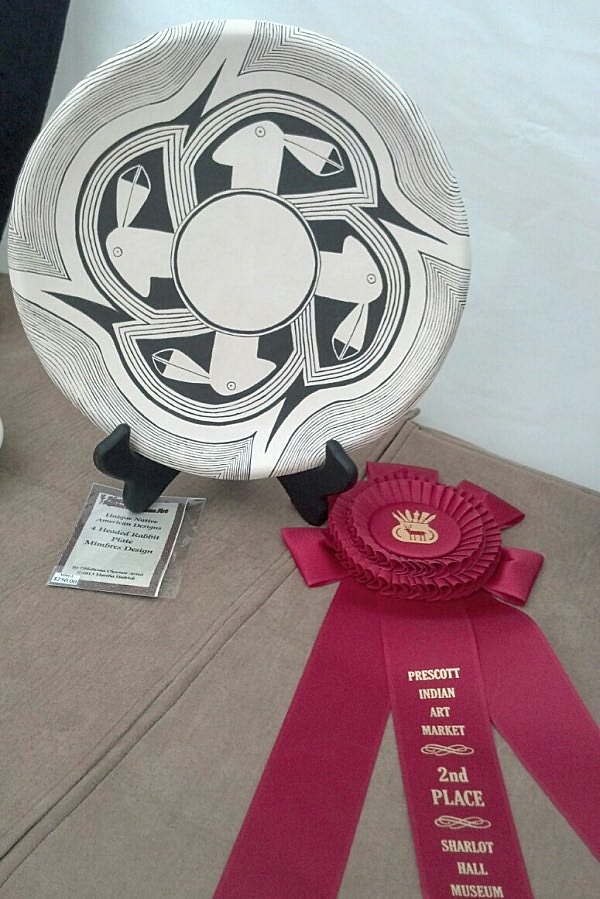 Plate with a 4 Rabbit Head Mimbres Design This plate has a Mimbres Rabbit Head design.  The plate was hand formed and hand painted using Commercially available clay and underglaze and fired in an electric kiln.  It is currently available in the shop.
SHOW: Sharlot Hall 2013
AWARD: Second Place Pottery

This Piece also won an Honorable Mention at The Gathering 2014 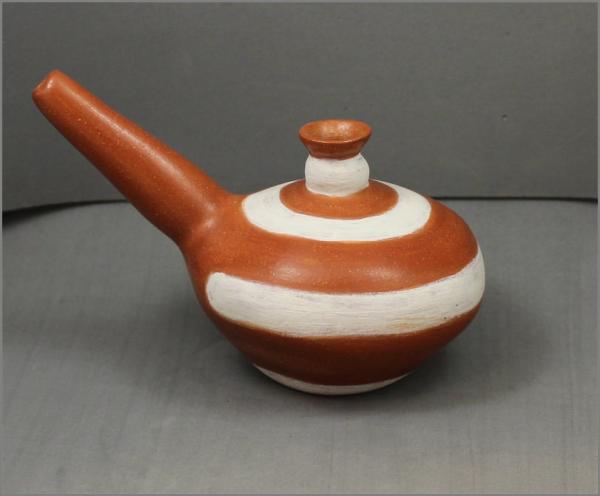 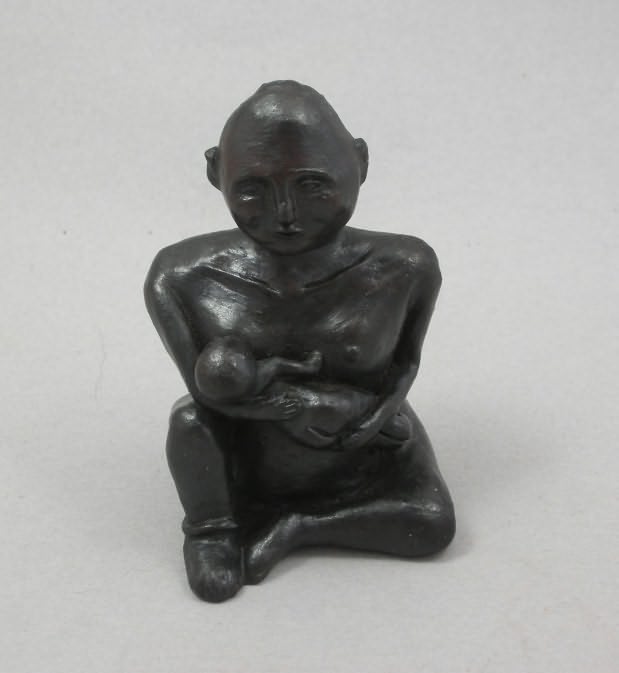 Heritage Award
2011 Choctaw Labor Day Celebration and Art Show
Tuskahoma, OK
This Mother and Child Effigy Bottle is a miniature reproduction of an ancient bottle made by the mound builders.  The Choctaw descend from the mound builders so I look to the rich culture of the mound builders for my traditional inspirations. I really like the effigy type pottery and I like to make many of them in miniature.  The Heritage award is defined as a work, regardless of category or other awards which exemplifies specific, traditional Choctaw culture. Those items that promote and educate those practices that are specific to our Choctaw culture. I am very honored to have won this award. 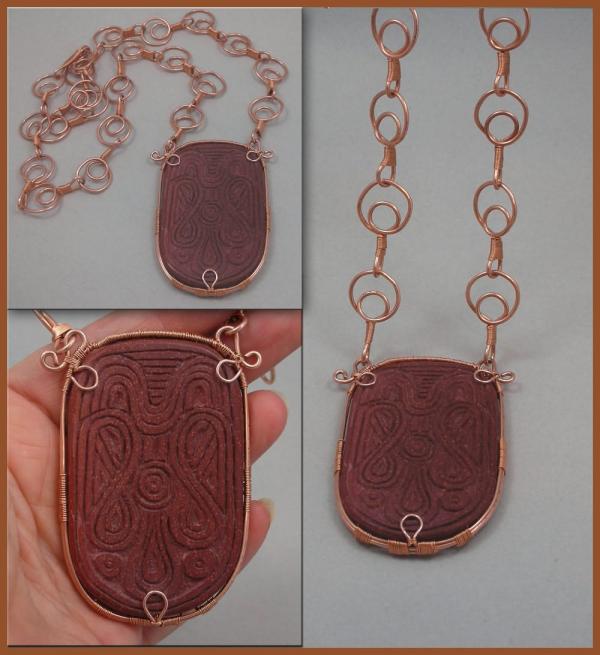 2nd Place Jewelry Category
2011 Choctaw Labor Day Celebration and Art Show
Swift Creek Pipestone and Copper necklace. This piece incorporates a traditional design from the paddles that a group of potters from the mound builders known as the Swift Creek potters used to paddle clay into pots. Their paddles were wooden paddles that they carved with these designs. They then put the clay over a gourd or rock and paddled it to create a bow or pot which would then have those designs overlapping over the outside of the pot. I find these designs to be very interesting and thought that they would make wonderful pendants. For this particular necklace I took a piece of catlinite which is the traditional indian pipestone used for making ceremonial pipes and I carved it with one of the swift creek paddle designs. I then used copper wire to make a setting and chain for the piece that also incorporates the circles and spirals of the piece. I used copper for two reasons. First it is a metal that was used extensively by the ancient ancestors for their jewelry. They used it because it was a metal that was found in a workable state and it is soft and easy to make into beautiful pieces even with their limited tools. I also chose it for the beautiful warm color and how it matches well with the stone. 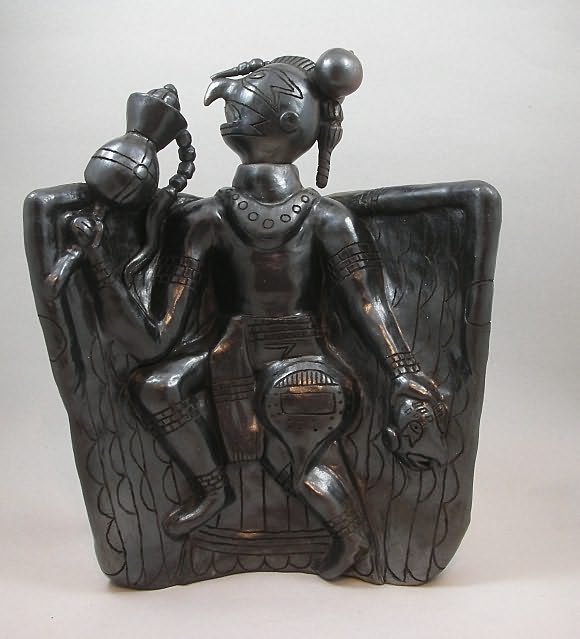 This bottle depicts one of the mythical god like creatures from the upper world of the tri-world the mound builders believed in.  He is a part bird part man one of the god like heros. 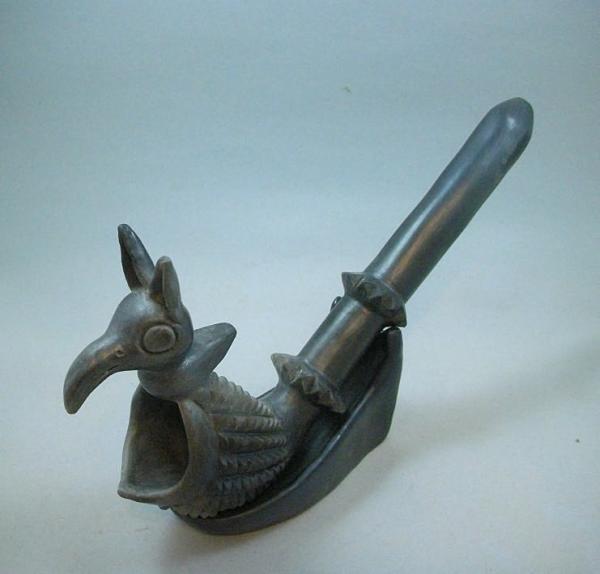 This pipe represents a mythical bird.  It is similar to a pipe bowl from the Mississippian period that was found in Georgia.  This one was made as a complete pipe rather than a bowl only.  It is hand built from native hand dug clay and traditionally fired in a wood fire. 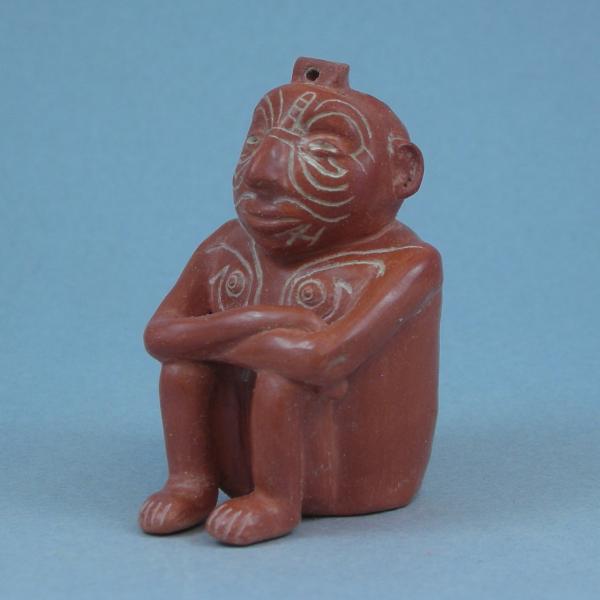 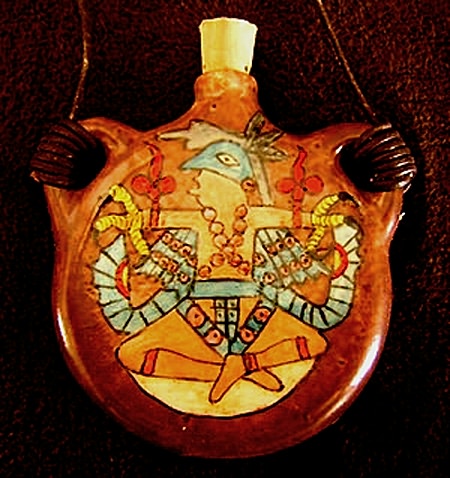 The Southeastern Indians of the mound building cultures of the Missippian period utilized the bird man design depected on this canteen necklace on many items both utilitarian and ceremonial.  It has been found on shell gorgets in several of the historic mounds as well as on shell bowls and ceremonial items.  This necklace was designed in the shape of a canteen that could have been used during this period.  Pottery canteens of various shapes have been found in mound builder ruins.  The birdman design was a frequently used design and this necklace was made to honor the artistry of this ancient culture.